We are delighted that Made in Korea is a featured commission for the fifth iteration of British Ceramics Biennial (BCB), the UK’s biggest ceramics event, in Spode Works, Stoke-on-Trent, opening on 23rd September and continuing until 5th November.

Our involvement is an installation consists of three pieces of work presented as one installation; by the Korean artists in residence, Kyung Won Baek and Jin Kim, who did a residency at The Ceramic House during May-June, a new piece made by Kay Aplin, and a four-channel sound installation by Joseph Young that links the two ceramic pieces together.

The two ceramic pieces created are presented on two parallel walls facing each other, creating an intimate installation space within Spode Works.

The Koreans’ work responds directly to the ceramic manufacturing traditions of Wedgwood in Stoke-on-Trent, with which they are drawing parallels with Korean manufacturing industry, in particular the female-dominated labour force and positions traditionally held by women. Kay’s work takes its inspiration from traditional Korean roof tiles. Whilst in Korea on her research trip last year, she visited many palaces and looked at traditional Korean architecture, and one of the defining characteristics of these pavilions is the ubiquitous presence of roof tiles, which form a functional and aesthetic purpose edging the roofs.

The two installations will evoke a cultural conversation between UK and Korean ceramic traditions and will be further linked by a four-channel sound installation by Joseph Young, composed of the sounds of hand-made clay making processes recorded in artists’ studios in Korea in Korea and industrialised ceramic production in factories in Stoke-on-Trent, creating a multi-layered soundscape. 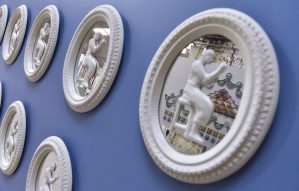 Sound and Public Space
Three Korean and three UK sound artists will engage in a sonic dialogue curated by Joseph Young. The sound works will reference ceramic manufacturing processes in the UK and Korea and feature on a GPS-triggered sound walk, with the sounds located at BCB sites in Stoke-on-Trent.

The app launches at BCB in September, offering visitors a unique 3D audio experience of Stoke and its historic manufacturing legacy. In partnership with Seoul-based sound artist and curator Hankil Ryu, the app will then debut in Seoul in November with a concert as part of the Resonance Festival at Mullae Arts Factory, accompanied by an exhibition of Aplin’s Korean-inspired ceramics.

Previous Next
View All